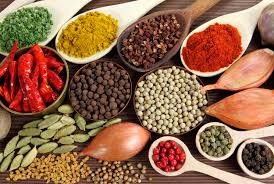 India is the prominent producer of a wide range of spices, oils and oleoresins from spices of various grades.

Spices derivatives are also expanding their applications to industries such as pharmaceuticals, medicine, beverages, food processing and personal hygiene products.

The contribution of Indian spices to health benefits has been well chronicled since Vedic times. Spices and herbs like black pepper, cinnamon, turmeric, cardamom have been used by Indians for thousands of years for both cooking and health purposes.

Susruta, an ancient surgeon, used white mustard and other aromatic plants in bed sheets to ward off mean spirits. He also applied a bandage from sesame to post operation wounds which may have acted as an antiseptic.

Medical writings of Charaka (1st century) and Susruta II (2nd century) referenced spices and herbs.Spices such as cardamom, ginger, black pepper, cumin, and mustard seed were included in ancient herbal medicines for different types of health benefits. In Ayurvedic medicine, spices such as cloves and cardamom were wrapped in betel-nut leaves and chewed after meals to increase the flow of saliva and aid digestion.

There are numerous spices used in cooking various dishes, the following 7 are essential to the Indian style of cooking.

Black pepper is one of the popular spices and known as king of spices’.

This spice was originated from Western Ghats of India. In India, black pepper is mainly grown in Kerala, Karnataka and some states.

Karnataka itself produces the 60% of total production of black pepper. This spices have has good economical importance due to its earning of exports from foreign exchange .This is called the ‘black gold’ due to its International trade factor. This spice is botanically named as ‘pipernigrum’ and belongs to the family of ‘piperaceae’.

Thus spices are the jewels of our India.