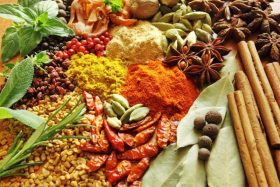 ‘’Spices are name and fame of our country India’’

Indian food and its taste is famous all over the world .the spice trade developed through  south Asia and middle East by at earliest 2000BC with cinnamon and black pepper ,and in east Asia with herbs and pepper . The Egyptians used herbs for mummification and their demand for exotic spices and herbs helped stimulate world trade. The word spice comes from old French word espice .the ancient Indian epic Ramayana mentions different spices like cloves. Spices have a very large history with china, India, Mesopotamia and Egypt .the Romans had clove in their history.

Pliny the Elder wrote about them. These spices gave good blend and gave different taste to the food item spices were used as medicinal purpose and also food purpose. Spices are used in many rituals mostly in Indian culture. Cardamom, cinnamon mustard were used 0in the rituals .the history and culture of spices is as old as India’s civilizations. Many Indians believe that spices are natural way of caring for yourself .in fact special preparations of spices known as NUSHKIES in Hindi are integral part of Indian culture.

These spices are now being misused and chemically infected to earn high profits if we use them effectively in our daily life we can conserve them for future ,many species of spices are endangered and on edge of extinction . Hence I conclude that save spices and their family trees many Indian RUSHIES use them for treating illness .STAY GREEN AND HELTHY CONSERVE THE SPICES OF INDIAN HERITAGE.